It’s no secret that I like to visit chocolate factories when the opportunity crops up, and so I’m sad to read that one of Moscow’s landmarks is closing down and being turned into luxury apartments.

One of the factory’s workers comments in the Guardian’s article on the closure:

“I’m sad in a way,” she added. “The smell here will disappear and then there will only be rich people.”

Whenever I visit my family in York it makes me happy to smell the chocolatey goodness that wafts around the Rowntree’s factory there, and I would love to live in an area that was perfumed by chocolate. From speaking to my relatives I know that they have all become accustomed to the scent and don’t notice it any more, but as a visitor it’s always noticeable to me.

There are some pictures of the soon-to-be-closed Red OCtober chocolate factory on Flickr.

We’re pretty much ready for Christmas now, with time to relax a bit and enjoy the traditions of the season. Over the years it’s been fun to see what others do and to pick up a few traditions along the way – this is what the season usually holds for me:

And this year I want to add a new tradition: the I want a hippopotamus for Christmas song (via Dooce). Go have a listen, it will make you happy. Merry Christmas! 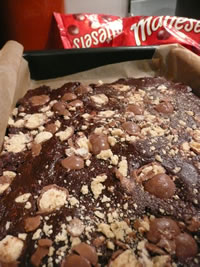 I have designated this Christmas as the one where I make chocolate fudge for all my nearest and dearest. I did a bit of digging and found various recipes, but I plumped for the easiest one because I don’t see the point of things being more complicated than they have to be, particularly at this time of year.

The recipe I used is from Greatest Ever Chocolate, and it’s simple:

You heat the chocolate, butter and condensed milk in a pan, stirring it often. When it’s all melted you turn off the heat and beat in the vanilla. If you keep beating the fudge mixture for a good few minutes it will turn smooth and glossy.

Then you’re at a point when you can start adding toppings and flavourings. I plumped for crushed Maltesers for half of the batch, and chopped hazelnuts and dried cranberries in the other half. You simply mix these in and then put the fudge into a tin of sorts to set (I used a brownie pan). In the fridge it sets in an hour or two.

It hardly takes any time at all to make the fudge – the bit I found time-consuming was chopping it all up into chunks.

Once I’d managed that though, I put the fudge into the pretty gift bags that I got with the Chronicle Books Holiday Treats Kit gift set I bought earlier this year. The recipe says the fudge will keep for about a month in a cool dry place, which means this is a good gift to make, since you can have some on hand to give to your friends as you see them over the coming weeks.

I had plenty of ideas for mix-ins that I’ve not tried out yet, but I will hopefully try a couple of these out in the next batch:

I think next time I will also use a mixture of milk and dark chocolate – I prefer milk chocolate, and think this would make a good combination.

Oh no! Blueprint magazine is ceasing to exist! I have enjoyed every single edition, and have commented to anyone who’ll listen about the beautiful design and use of typography, let alone the content of the magazine itself. Gawker is saying that few people will mind, but that’s clearly not the case. (I read this unhappy news on Mirror Mirror.)

Luckily, last night I made a whole kilo of chocolate fudge to give to people over Christmas. I will console myself by eating that and making another batch for our friends and family. (Info about how to make the fudge and ideas for toppings coming soon, once I get a spare few minutes!)

This post on Ask Metafilter is cheering: what do you look forward to? For me, my favourite little things are: getting nice things in the post; the delivery of groceries from Sainsburys (about once a month, always a treat); watching the birds in our garden; Halloween; phoning my mum; Friday evenings, when the whole weekend lies ahead; and now that we have a kitten, I’m always looking forward to seeing her. I look forward to buying the paper on Saturdays (The Times), and to sitting reading through it all. I also look forward to various favourite programmes on the radio, but the BBC have somewhat spoiled that this year by moving a few things to new times. And I look forward to food a lot!

What do you think about Russell Brand? Though I find some of what he says horrendously offensive, I try not to miss his radio show because it is brilliant. So I am somewhat on the fence, but certainly more for him than against him!

Last week BBC 4 broadcast his road trip across America, following in the footsteps (or tyre tracks) of Jack Kerouac. It’s a shame they made it into one hour long show – they spent weeks filming it and I bet could have stretched it into a short series with all the material they must have captured. There’s more info here – worth watching if they repeat it.

In other BBC-things-you-may-have-missed, Radio 4 did a show narrated by Mark Radcliffe about pop songs being translated, often incorrectly, into foreign languages. You can catch it on the BBC Listen Again radio player.