Through the local grapevine I heard about the recently-formed Nottingham Craft Mafia, which is part of the worldwide Craft Mafia family. It’s exciting to know that there are creative people making lots of nice things here in Nottingham. On Saturday I had a peek at the shop they have opened to sell their wares – it was well-presented and welcoming, and I really hope it will work out well for them in these tough times. Opening the shop at this time of year should really help – there were lots of items for sale that would make great Christmas presents.

And there’s a Craft Mafia in Manchester now – must investigate next time I’m visiting.

In the John Lewis fabric department yesterday I spotted that they now carry quite a few of Amy Butler‘s quilting fabrics. (I’m not sure if they also stock the heavier-weight fabrics – perhaps they are upstairs in the upholstery section?) There was also a good selection of her patterns for sale. I foolishly didn’t look to see what the price per metre was – I’ll check next time I’m in there and report back. There’s no mention of her on their website – but they don’t sell fabrics online so I guess that’s not surprising. 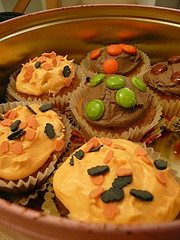 I really enjoyed Halloween this year – we hosted two small parties, and the (very few) trick or treaters who called were very polite and in good costumes. (Last year we had some nice children, followed by some surly teenagers in plastic masks.)

Our pumpkins were a great success, but are now sadly wilting. The Orla Kiely pumpkin in particular is fading fast – cutting those shapes out really weakened the pumpkin’s structure by the looks of things. I did not bargain for one of my photos being picked up by the Flickr blog – which resulted in almost five thousand people looking at my little pumpkins! (And it also made me wonder if amongst the trick or treaters there would be a representative from Orla Kiely Inc with some sort of cease and desist notice…)

Every evening before the parties was spent preparing food. Even though we weren’t serving a meal as such, there still seemed to be a lot to do, and it was an exhausting week.

Fairy cakes from the Nigella Lawson How to be a Domestic Goddess book. These are simple and quick to make, but this time I doubled the recipe so that I would have enough cakes, and that slowed me a down a bit. Half of them were covered with orange-coloured frosting, and half with chocolate buttercream.

While the range of Halloween goods on sale in the UK seems to increase every year, much of what’s available is tacky. So I couldn’t find any nice cake sprinkles, and instead spent a while in the local shops looking to see which sweets and chocolates could be adapted to suit my purposes. I ended up with Smarties, Minstrels, and M&Ms. And it is for that reason that, had you been a fly on the wall in our house, you would have seen me picking through all of these and removing all the blues, pinks and other seasonally inappropriate colours from the mix. (And it’s also why we have a little dish of very brightly coloured sweets to eat!)

Rice Crispy squares – these are utterly addictive, and I make them any chance I get. They are also dangerously easy to make – you melt Mars bars and butter, and stir in the cereal. The sprinkles on these are from last Halloween, bought in a little cake decorating shop in York, and thankfully were still safe to eat this year.

Peanut butter cookies – these are from a children’s cookbook I have, and this is where the M&Ms came in. I ate all the blue ones to that they wouldn’t ruin my Halloween colourscheme…

I had hoped to make witches’ fingers – which are really customised cheese straws. My mum usually makes these with a sliced almond for a fingernail, painted red. Time was not on my side and so I just made cheese straws.

Alongside all this we served bowls of seasoned toasted pumpkin seeds, tortilla chips and dip, and some
pretty Halloween chocolates from Germany, which I found in Waitrose.