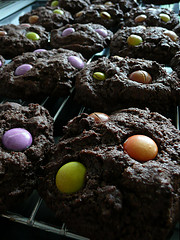 Happy Halloween to you! I hope you have an enjoyable weekend, whatever you’re up to.

I have been spending today baking in preparation for a small Halloween party we’re hosting tomorrow evening. Here’s a little preview of what our guests will be eating:

We also have some blackcurrant brew, again from M&S. This came in a set of four glass bottles (like a pack of beer) and was not sold as being in any way connected to Halloween, but it’s purple and has nice illustrations on, plus it contains the word ‘brew’. So it counts!

I’m pleased with how the chocolate cookies, pictured above, have come out. The food colouring on the Smarties seemed to struggle a bit with being baked, and the overall effect is that the Smarties look a little washed out and distressed – which I think lends them a good look for Halloween. Anyway, I’ve got more baking to do – back to the kitchen I go…

Here in the UK it’s the RSPB’s Feed The Birds Day today – a little confusing since it’s actually two days (both Saturday and Sunday), but that’s not necessarily a bad thing. Around here, every day is feed the birds day – I spend much of my spare cash on bird food and bird feeders, and am always looking out of the window to see who’s paying us a visit.

This week my new bird table arrived, and unfortunately it is flat-packed and so has not yet been assembled. But I also ordered this little bird feeder/table, which we’ve attached to a fence near our kitchen window. When we moved into our house four years ago, there was very little vegetation in the garden, and so the birds didn’t like to spend much time there. But now we have plenty of greenery, and as a result their visits have grown longer and more frequent (the goldfinches in particular are costing me a fortune at the moment, eating their way through bag after bag of sunflower seed hearts). I’m hoping that this new feeder will tempt the birds to come a little nearer the house, so that I can get a better look at them. Since it was put up, I’ve seen a squirrel come and have a look at it, and also a magpie. But I’m really hoping the robins will use it, so keep your fingers crossed.

The RSPB website lists five top tips for helping wildlife in your garden:

I’m keen to make a home for frogs and toads – we don’t have a pond, but I’ve seen frogs in the garden.

I hope you see plenty of wildlife in your garden this weekend! And if you’re interested in all things nature, you might enjoy reading the new UK Nature Blog.

Oooh look: lots of vintage or vintage-looking Halloween goodies at the Crafts Dept. I am planning a little Halloween party at our place and wish there was time to order some old-fashioned Halloween cards from eBay – but with the upcoming postal strike I don’t think things would end happily. I hope to get all the decorations out this weekend and bring some orange and black cheer to the place. We’ve already got a couple of pumpkins sitting on the kitchen table.

During our two week tour of the Deep South, shopping opportunities were rather more limited than I had hoped. In many small southern towns, it seems businesses have moved to out-of-town premises, and so it wasn’t often that we got to wander around a downtown area that was still vibrant. But there were still a few treats to be found, especially in Savannah, Georgia. 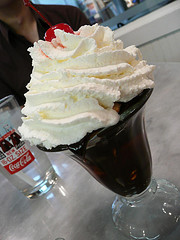 It was hot and humid in Savannah, and I really struggled. This meant we kept diving into places just to get the benefit of their air conditioning. And that’s why, around an hour after I’d eaten breakfast, I found myself having a second breakfast in a diner near the Catholic Cathedral there – which is a beautiful building with amazing stained glass windows. We only popped in for a drink (honest!) but when I saw the menu I was suddenly tempted to have a rather substantial cooked breakfast of poached eggs, english muffins, salsa, cheese and guacamole. It was great – worth going if you’re in that area during the day (I think they only open for breakfast and lunch).

The Savannah College of Art and Design has a shop selling work by students past and present. I found that all the things I really wanted were large and/or breakable, and so there wasn’t much I could buy since I’d have to carefully lug it all around Georgia and then back over the Atlantic. But it was a great place to browse – and they also have an online store. And we spent even more time in The Paris Market, which had more interesting things on display than most museums, and was beautifully styled. Again, geography and the practicalities of long-haul flights meant that I couldn’t really buy anything, much as I wanted to. I did purchase a few teeny-tiny little charms with pictures of saints on – perhaps for use in a future craft project. Further down the same round was @home Vintage General, an interiors shop with lots of things you didn’t know you needed until you saw them. And then, when the heat gets too much for you, cool down with a sundae at Leopold’s ice cream bar. On the day we visited, the heat was so intense that my sundae was melting even before the waitress had finished making it, but it was delicious all the same. 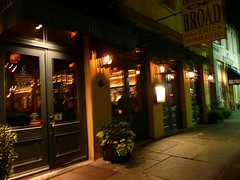 I also enjoyed a hot fudge sundae during the few hours we spent in the small, pretty town of Beaufort, South Carolina. We wandered around in the heat for a while (not so humid here though, thank goodness) admiring all the houses, and then happened across a very small ice cream and lunch place called  Southern Sweets. It was a few doors down from a small but perfectly formed gift shop where I bought a couple of presents for myself: Lulu’s.

Charleston had a lot to offer, food-wise. Our hotel there had a concierge (does that make us grown-ups?) and when we questioned him about the best places for two vegetarians to get a meal, he didn’t hesitate to recommend Slightly North of Broad. The meal we had there was fancy, and the staff were very helpful and friendly. (We sort of keep an unwritten list of places – shops, cafes, parks, etc – that we would have moved to our town if it were possible, and I would certainly add this to that list. It’s too fancy to go to very often, but great for special occasions.)

Elsewhere in Charleston we found a Thai restaurant called Basil, and they were really helpful about alerting us to any items on their menu that may sound vegetarian but weren’t – and also to producing vegetarian versions with no fuss.

(In the interest of full disclosure, I should report that our trip wasn’t filled with good food: we had some dreadful meals, including a few lunches that we threw in the bin rather than eat, a slice of key lime pie that I cannot believe people would have the nerve to charge money for (again, that had to go in the bin), and because we were on a coach tour holiday, we even had a couple of days when we stopped at Walmart for lunch. I kid you not.)

I’m back after a holiday in the US – two weeks on a coach tour around the Deep South. We spent time in Georgia and South Carolina, and it was somewhat mixed. We saw some lovely places, we saw some dull places, and so on. I’ll write about the lovely places soon – and you can see my first batch of photos on Flickr (lots more to come). It was far too hot and humid for me over there, but as I type, it’s a cold and very windy day here so I’m hiding indoors. 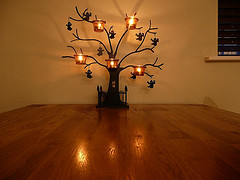 And now it’s dawning on me that it’s October, which means it’s just a few short weeks until Halloween (four weeks today, to be exact). I was hoping to buy some pumpkins and gourds at the farmers’ market this morning, but I got the date wrong and there is no farmers’ market today, so that was the end of that. But I can tell you that I saw in John Lewis yesterday that they have a great range of Halloween goodies. I got my little Halloween tree there last year, and they seemed to sell out of them very quickly – so you may like to know that there is a 2009 version for sale now. In the shop they also had little tealight holders of haunted houses and orange glass, but I can’t find those online – they were inexpensive and very sweet though, so it’s worth a look in the shop if you get chance.

While we were in America I managed to get a copy of the Martha Stewart Halloween special magazine, which I’ve enjoyed flicking through – and there’s an extensive range of Halloween ideas on the Martha website already. One thing in the magazine that really caught my attention is the fact that Martha mentions she is throwing a Halloween Ball this year, which sounds fascinating. I assume my invitation is in the mail…

I also found a Halloween edition of the American version of Country Living (which is a very different magazine to its UK counterpart). Again, lots of nice ideas, but unfortunately not many of them seem to have made it to the website.

Other Halloween things to look at: