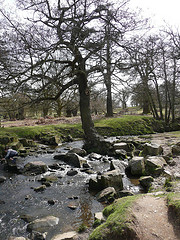 We’ve had a few days of spring sunshine here in the Midlands, and there is blossom everywhere – not to mention all the daffodils. Our luck is sure to run out soon, and so on Friday I grabbed the opportunity to visit Bradgate Park in Leicestershire while the skies were still blue. 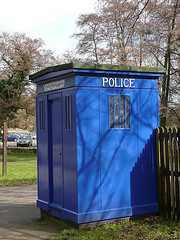 When I was little, we lived in one of the nearby villages (Cossington – you can actually see my old house in this picture, it’s the one with the red door. My bedroom window was the one upstairs on the right.) and often visited Bradgate. Friday was the last day of the school Easter holidays, and the warm sunshine meant the park was packed with families. For me, the park is at its best when it’s quiet and peaceful, but I tried to remember that 20 odd years ago, I was one of those children running around that very same park, playing in the stream and making all kinds of noise.

As well as the streams and rocky scenery, there is another aspect to this park that makes it very appealing to children: a TARDIS. It doesn’t actually say it’s a TARDIS, but I think we all know that’s what it is. The signage says it’s a police box, but I’ve never seen the police anywhere near it, so I’m not buying that.

Have you been watching the new Doctor Who? I loved the first episode. The second one was on last night, and while I thought it was very creative and well-written, I found it rather sad and depressing. Not one I’d watch again – but hopefully the rest of the series won’t be so gloomy.

…but not together, obviously. I’ve spotted two upcoming Radio 4 treats that may take your fancy: first up is a four part series called Meet David Sedaris. I love his books but haven’t heard him on the radio much – I am so excited about this series and will be marking it on my calendar to make sure I don’t miss a minute.

And secondly, vampires! In Scotland! From the blurb:

“When Pc Alex Deeprose was called to Glasgow’s sprawling Southern Necropolis on the evening of 23 September 1954, he expected to be dealing with a simple case of vandalism. But the bizarre sight that awaited him was to make headlines around the world and cause a moral panic that led to the introduction of strict new censorship laws in the UK.

Hundreds of children aged from four to 14, some of them armed with knives and sharpened sticks, were patrolling inside the historic graveyard.

They were, they told the bemused constable, hunting a 7ft tall vampire with iron teeth who had already kidnapped and eaten two local boys.”

The programme, called The Gorbals Vampire, will be broadcast on BBC Radio 4 on Tuesday 30 March. The article says it’s on at 2300 GMT – but I think the clocks go forward this weekend, so perhaps that will mean it’s on at midnight? Confusing, but worth listening out for, with garlic at hand just in case.

Yesterday Nottingham’s Broadway cinema was filled with crafty people – and they looked to be a rather well-dressed bunch! They had all gathered because Nottingham Craft Mafia were showing the Handmade Nation film, and selling their wares at a craft fair in the bar upstairs.

The film was very interesting, and it was great to hear the voices of people whose books and blogs I have long enjoyed. But – and this is a big but – the low budget nature of the film meant that much of it was shot on hand-held cameras, and it didn’t take long before I had motion sickness. I sat quietly in the cinema, realising I’d have to cancel my plans for a fancy lunch afterwards. I thought it was just me (I get migraines and am susceptible to motion sickness), but my friend Eloise was also ill – she’d had to close her eyes through most of the film. When the lights came up, we headed outside for some fresh air. (It sounds like we weren’t the only ones to have had this experience.)

It was a while before we felt better, so we never got to go for lunch or to do any shopping. We managed a peek at the craft fair, but weren’t really in a fit state to do it justice. I did see a few things I want to check on at the Nottingham Craft Mafia shop though – in particular I liked Amy Blackwell‘s creations (there’s a little gallery here).

And thinking back to the film, there was much about it that I enjoyed: I loved the posters made by the Little Friends of Printmaking; Jenny Hart was inspiring; Nikki McClure‘s paper cut artworks were fascinating and beautiful; and I liked hearing Jill Bliss talk about her work, of which I am a big fan. And in general I loved the fact that these people lived in worked in normal places – they didn’t all have glamorous studio spaces or giant homes; they just did their creating where they could.

Sometimes it’s the simple things in life that give you the most pleasure. For me, that often means listening to something good on the radio. I have a couple of digital radios (I like the Pure ones, if you’re considering buying one) and I listen to BBC 6 Music all the time. I love it that the music they play is so diverse that you never hear the same thing twice within the space of a day, and that many of the presenters know a LOT about music.

I’m so sad to hear there’s a possibility that 6 Music may be closed down – and I am desperately hoping that it won’t happen.

Former 6 Music presenter Phil Jupitus has a lot to say on the subject: “As I listen to 6 Music today, I keep hearing tracks and thinking, where else would I hear this kind of radio during the day? The tragic answer to that question is nowhere. The end of 6 Music at this moment in the BBC’s history is not only an act of cultural vandalism, it’s also an affront to the memory of John Peel and a slap in the face to thousands of licence-payers.”

There are Facebook groups being set up, Twitter ribbons you can use, and all sorts of other ways to get involved if you want to. I think I’m going to send an old-fashioned letter.

Did anyone else watch Kirstie’s Homemade Home this week? If I’m honest, it was something I looked forward to for several days before it was broadcast. However, I ended up being out that evening and so it wasn’t until today that I managed to sit and watch it.

I enjoyed the show, but was left feeling a little disappointed by the way there was only enough time to skim the surface of each of the featured crafts… And I would have loved to know more about the planning of the kitchen space. I also want to know more about the house itself: did Kirstie buy it, or did the production company buy it? Will she live in it, or are we simply being led to believe she will live there? I found answers to some of these questions on the Channel 4 website: it is a holiday home, which Kirstie and her family will use (will they really?) and which you can rent out. (There’s also an article in The Telegraph about her buying the house.)

I was amazed by the exterior of her parents’ house – having seen clips of this earlier in the week, I thought it was a National Trust property rather than someone’s family home. I was also interested to see Cath Kidston’s kitchen – I would have expected Agas and Welsh dressers and antique pine, but it was all white glossiness. (I was particularly keen on the apple green splashback that took the place of tiles above her worktops.)

But there was one clip in the show that grated on me: when she was driving round in her enormous gas-guzzling car, looking for skips outside people’s houses so that she could find some free treasure that people were throwing out, she explained that the reason she liked to pick up old and unwanted items (like the mirror she found in one skip) was so that no more of the world’s resources would have to be used to make new objects. She seemed completely unaware that a statement like that sounds ridiculous when the person making it is behind the wheel of a shiny, fuel-inefficient car.

Having said all that, I will keep watching though…

I’m really looking forward to this new BBC series, which starts tomorrow night. They have put a huge amount of material on their website, and you can watch plenty of clips of the country – I’ve been enjoying this one about us all waking up and going off to work/milk the cows, depending on where we live.

I like the approach they’ve taken for some aspects of the show – it looks like they will be focusing on showing us some of the things that we take for granted, like electricity and cash from bank machines, and how they are kept running. There’s one clip that shows the work done to ensure there’s enough electricity for us all to switch on our kettles after our favourite TV shows finish – I had no idea that we are the only country in the world where they have to plan for when we’ll want to make cups of tea. (In case you’re wondering, they get electricity in from France at the crucial cup-of-tea-making moments.)

There’s also a selection of photos of British towns and landmarks, taken from the air – I like the London by night ones.

What do you think about Russell Brand? Though I find some of what he says horrendously offensive, I try not to miss his radio show because it is brilliant. So I am somewhat on the fence, but certainly more for him than against him!

Last week BBC 4 broadcast his road trip across America, following in the footsteps (or tyre tracks) of Jack Kerouac. It’s a shame they made it into one hour long show – they spent weeks filming it and I bet could have stretched it into a short series with all the material they must have captured. There’s more info here – worth watching if they repeat it.

In other BBC-things-you-may-have-missed, Radio 4 did a show narrated by Mark Radcliffe about pop songs being translated, often incorrectly, into foreign languages. You can catch it on the BBC Listen Again radio player.

Next Page »
Busywork
Blog at WordPress.com.